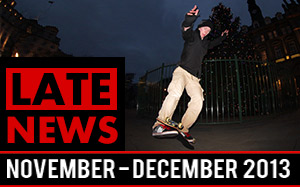 The winter months are never particularly hectic in the freestyle world, and this year has been no exception. As we look forward to freezing temperatures, snow coated skateparks and more garage sessions than we could care to mention, we cast our minds back over the past few months to bring you the November/December issue of Late News, looking back at some of the biggest talking points within the freestyle community.

Drawing to a close in November, the FS.com online video part contest brought together the finest amateur freestylers from across Japan in a series of impressive video parts and a closely fought contest from riders of all ages, genders and skill levels. Ultimately though, the standout winner of the contest was the freestyler Teru from Osaka. The general standard of the contest had clearly risen from the previous years and looks to expand further in 2014, with Toshiaki Fujii from FS.com apparently expressing an interest in receiving more international entrants next year.

Check Out the full results on the FS.com Site

In the least shocking news of the year, it has been announced that the World Round Up will be returning for 2014. Taking place between the 16th and 19th of May 2014, the event will be returning to the Cloverdale Rodeo in Surrey, Vancouver for it’s third year. The Team at LateTricks have started saving hard to try to get out there this year and we certainly hope to see you all there!

Stefan ‘Lillis’ Akesson announced to the F-Forum Facebook group that the 2014 Freestyle World Championships would be taking place in Brazil in the summer. The event has been under discussion for some time with a preliminary period for the event being suggested for the first weekend of August, around the 2nd and 3rd.

The group continued to discuss the possible difficulties of the event running alongside the FIFA World Cup, not only in relation to overcrowding and difficulty finding sponsorship and accommodation, but also the wealth of Football and Freestyle skateboarding fans who would just be too torn to choose between the two events. Event organisers quickly responded by explaining there was already a potential sponsor lined up for the event, which would help drive the planning forward, from which we can deduce earlier confirmation dates of the event and more time to book accommodation. The World Championships are a staple of the freestyle calender, the 2013 Championships taking place at the NASS Festival in the UK 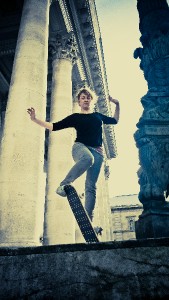 The Freestyle Rocket Team has now been joined by female German freestyler Heidi. We don’t know much about the team’s latest addition, but you can check out her profile page on the Freestyle Rocket Site now for a little bit more information.

The freestyle podcast returned from it’s long hiatus seeing Tony Gale and Bob Loftin returning to the airwaves to discuss the burning issues within freestyle in Episode 16 – the British Invasion. In the absence of Matt Gokey, UK freestyler Simon Mrozinski made a guest appearance alongside the team to discuss the LateTricks Ledge Demo, the US Championships, the World Championships, Romanian Freestyle and more. If you haven’t heard it yet, head over to their site now and download the podcast.

On the final day of December, the long overdue announcement was made that Isamu Yamamoto has joined the FS.com team, putting him amongst some of the finest freestylers in the world. Isamu has had an incredible year putting down several contest wins and some impressive video parts. Check out his welcome part now, shared on the FS.com YouTube page

The LateTricks team have done our part for the upcoming freestyle community video project launched by the F-Forum a few months ago, culminating in a shoot with Scaife Gooch and Alex Foster around Leeds City Centre in November to record a few last minute clips. When you’re reading this the deadline for submission will have passed, so keep your eyes peeled for the full video when it arrives later this year 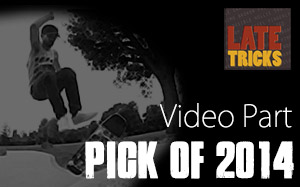 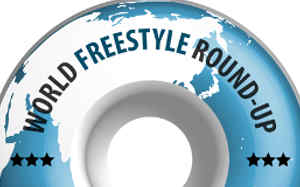