Sorry, I have a long, boring reply, but I’m bored working from home, so here we are. A legitimate essay. Again, sorry.

In principal I agree with you Denham: anything that gets people into freestyle is surely a good thing for the scene. I would, however, question how effective TikTok is at actually doing that. Does a higher number of views result in a higher level of exposure? And if so, how tangible is this exposure?

Of course, finding out about things like this is very difficult: in theory, the only way you could do this would be to ask each and every active ‘freestyler’ (by which, I suppose, I’m referring to anyone whose skating leans at least 51% towards freestyle) how they got into freestyle, but given that this isn’t the case, all we can really go off is estimates and what’s easily available online.

So, to start with, I’ve had a look at Google and YouTube search data across a period of several years to see how the rise of TikTok has had an influence on search data. In theory, the increased exposure should result in more searches, as these sites are the best way to find out more information. Whilst a lot of the data seems questionable (and seems to vary depending on your search criteria), it largely seems that freestyle is searched just as frequently as it has been for the last five years, despite its increased exposure. If you’re bored, like me, you can find out more here. 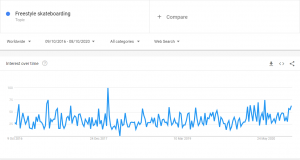 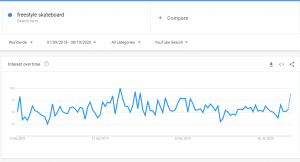 If I was to take a recent, more specific example, lets look at the World Round Up. I believe it’s being touted as receiving over 150,000 views or something – although, if we realistically boil this down (considering this was across five videos and the likelihood is that a high proportion of those viewers were returning viewers) the number of viewers was probably closer to like 35,000 (and on some videos, it’s closer to the 20,000 mark), which is still an impressive number.

I guess then, as a result, there should be more people freestyling now then? Like, a lot more? But there doesn’t appear to be. Maybe that’s because the videos didn’t reach out to the right people? I guess we’ll never know. There could be a lot of new freestylers out there right now who just don’t want to put their stuff online, but who’s to say. I suppose guys like Mike, Tony, Terry, Christian and Witter would be in a better position to say, as they’re the ones actually dealing with moving boards around. And I’m not saying that people couldn’t be freestyling on a street board either, of course, but there should have been at least a little uplift for freestyle shops as a result.

Now, looking at exposure: I will say that, as a competitor, as a result of appearing in that video, which was watched by about 23,000 people, I got one extra follower. I know I didn’t place near the top, but seriously, only one person? Is that even exposure? I’d get more than that by shouting my username out on a bus.

Could it be that just saying something is wonderful without ever questioning whether or not it’s actually wonderful means that it’s not the same as it actually being wonderful? And by questioning the real, tangible importance of the efforts made to promote freestyle, we’re not being negative, or trying to create some kind of exclusive club, but just checking to see whether or not we’re wasting our time? Well, to say ‘wasting our time’, I suppose that’s dependent on what you want to achieve with your time. If the goal is promoting freestyle to potential participants, it’s about assessing whether a ‘scattergun’ or ‘precision’ approach would be more effective.

Which rather clumsily brings me back to the topic of apps such as TikTok and, to a lesser extent, Instagram, which glorify the wastage of time. It’s almost sinister the way these apps encourage us to waste our time with infinite scrolling, all so they can sell advertising space. Instagram recently introduced such an endless scrolling feature, and, without realising it, I started spending more time on it, looking at things I didn’t care about and skaters who I don’t know (and will never know, due to the nature of the app) landing some genuinely impressive stuff – which is fine, but it’s still just a waste of time. I’m not really achieving anything with it. Anyway, that’s my issue and beside the point.

So, I decided to take a look at the top skateboarders on social media sites. I’m not a user of TikTok, so finding this out has been hard. It’s been a bit easier for Instagram though, and it seems like the majority of the most popular pages are company pages or top, established (largely contest-focused) professionals, with companies such as Braille and its various personalities, whilst still near the top, lagging behind. By contrast, these pages lead the way on sites such as YouTube.

While YouTube provided a platform for establishing yourself a ‘personality’, apps like Instagram and TikTok seem to almost entirely encourage the opposite. Whilst freestyle in its very nature is expressive, and could be considered an extension of a personality, just seeing someone do tricks isn’t enough to know who they are. On TikTok, people don’t care who you are.

With only one minute, there’s only so much you can do. That’s why TikTok personalities are largely overexaggerated – it’s people trying to cram who they are (or rather, who they want to be seen as) into 60 seconds. It’s important to be as memorable as possible as they want you to subscribe, they want to be famous, and they want money. In terms of skateboarding, this is gradually moving us away from actual skateboarding, and more towards watching other people reacting to skateboarding, as that’s what brings in the clicks. 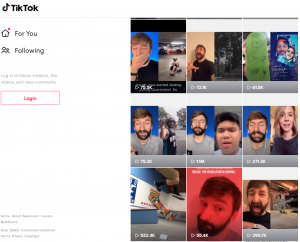 For example, let’s look at Braille – over 5 million YouTube subscribers and 570,000 TikTok followers. Now, I’m not a fan of Braille’s stuff, but I get that other people are, so that’s fine, it’s not what I’m looking at here. Take the Braille YouTube videos: Often 10 minutes long, built around dialogue between skaters, peppered with a small amount of skateboarding. Plenty of time to build up a good representation of who you are, build affiliation with a brand and even promote the act of skateboarding. Now look at their TikTok account. The majority of clips are Aaron Kyro’s face as he watches other people doing things. This isn’t promoting skateboarding; this is promoting Aaron Kyro.

I think I lost track of where I’m going (so much unwarranted rage within me), so I’m going to circle back to freestyle. To address the idea that core freestylers take to apps such as TikTok is beneficial for promoting freestyle in the ‘best way’, the very nature of the app limits the way that we can do that. What separates freestyle from the rest is its subtleties, and it’s incredibly difficult to show that in any kind of meaningful or lasting way when you’re forced to fit the app’s narrative of “look at it once, then move on forever”.

It could be argued that this would be freestyle adapting to the times, but we have to question whether adapting it too much takes it away from what it is meant to be. To me, it’s something personal and expressive. It should never be disposable because, in a weird kind of way, it’s part of who you are. By posting on TikTok, we’re not changing the narrative of freestyle. TikTok is. To me, there’s no other way to spin it.

Having worked in marketing though, I know that sometimes, mass exposure is all it takes to push someone to doing something, so I suppose that freestyle being on TikTok isn’t necessarily a bad thing. I wouldn’t push anyone away from doing it, but I have no intention on doing it myself. I couldn’t convince myself that it was anything other than an attempt to promote myself, rather than freestyle. I’m well aware that’s what Instagram is for too, and I’ve made my peace with that. LateTricks is there to promote freestyle, my personal page is there for me to share things I’m proud that I (and my friends) achieved. If it promotes freestyle in doing so, that’s great, but that’s not why I’m doing it.

Looking at the best ways to promote freestyle them, sites like YouTube and Facebook, whilst undeniably fraught with their own issues, hold more important roles in building up freestyle. I’m one of the many people here who says that I hate Facebook and how toxic it is, but in the absence of forums, it remains the best way of actually talking about freestyle. You can’t have an in-depth discussion in the comments of a TikTok video. YouTube also provides more freedom for videos, which can be of any length and can be easily searched. In terms of facilitating self-expression, its unquestionably stronger.

To summarise, I don’t think that opposition to sites such as TikTok is about a failure to embrace change, nor do I believe that it in any way holds freestyle back. To me, TikTok is a non-entity. Backed up by stats, it’s clear to me that it doesn’t make any significant impact on freestyle for better or worse. Some of you might have different experiences, and I don’t doubt that, but I would question how significant the impact is.