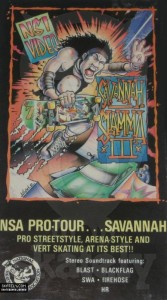 This was the third annual Savannah Slamma contest, the first of which to include a freestyle contest, and took place on Friday 19th May 1989. The freestyle event took place away from the main event and was held in a car park in Savannah City Park. This was Joe Humeres and Darryl Grogan’s first pro contest. The riders were divided into two heats and given two runs with the top 5 progressing to the finals.