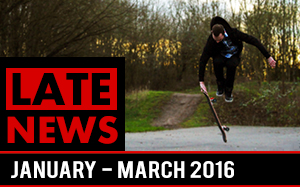 This winter has welcomed an exciting mix of videos from up and coming amateurs, legendary professionals and just about everything in between. Here are just a few of the biggest videos from the past few months that are well worth a watch or two!

Tim Byrne – Something Else

Footage of Tim Byrne skateboarding is like gold dust. We all know that the man is an incredible freestyler but beyond the occaisional combo or vending machine-based flip trick, we don’t often see much of him. This year, Tim has set out to change that, releasing a full part of technical freestyle and park-style combinations, featuring a few brand new tricks, all of which have been executed perfectly.

Combining the endlessly impressive Alexander Rademaker with the brilliant videography of Brett Novak has proven to be a winning combination before, and Kyanq proves that this is still very much the case. This undoubtedly painstakingly edited short film features some incredibly difficult and creative skating and will keep you guessing what’s coming next the whole way through.

The Japanese freestyle scene is one of the strongest and most impressive in the world, producing a continually high standard of skateboarding and looking like they have an amazing time in the process! This New Years’ Day jam features some truly incredible freestyle hammers and an incredible line from Isamu Yamamoto!

When the incredibly talented Tony Gale teamed up with the equally talented freestyle BMXer Keelan Phillips, the resultant video was bound to be good. Both Tony and Keelan put together a few solid runs in this short and sweet video, which makes for a great watch. So, who won, skateboard or BMX? The choice is yours!

We always like to start off the year with a bang, so for the third year in a row, we released a compilation of our video highlights from 2015. Featuring the likes of Gunter Mokulys, Tony Gale, Turi Zoltan, Marco Sassi and many many more, this video was a joy to edit and we hope you like it too!