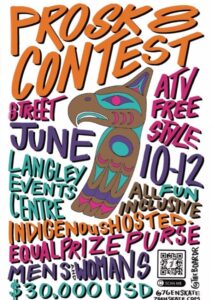 The 7 Generations Cup, the name for which is taken from the Kwantlen First Nations’ seven laws of life (health, happiness, humbleness, generations, generosity, forgiveness and understanding) was the first mainstream skateboarding contest to incorporate a freestyle division since the Munster Mastership contests in Germany circa 30 years prior. The contest took place on 10th – 12th June 2022.

The event was conceived and launched by Kevin Harris, with Terry Chui leading the management of the freestyle contest. Other divisions at the event included a miniramp contest, which featured a replica of a famous Powell Peralta ramp, as well as an all-terrain contest. The freestyle contest was invite-only, with non-attending skaters invited including Marius Constantin, Tony Gale, Robert Wagner, Pete Betti, Isamu Yamamoto, Yuzuki Kawasaki and Rhianna Grigore, amongst many others.

Judges for the event included Kilian Martin, Ray Meyer and Alex Foster, all of whom were announced prior to the event, alongside Kevin Harris and Glen Billwiller, who joined the panel on the first day of qualifying. The event featured live scoring, using the Boardr app, which was displayed throughout the contest. In addition to the main contest, a best trick contest was scheduled to take place; however, due to time constraints, the event was cancelled and the prize money was distributed amongst the skaters.

An issue with the judging system on the day of the contest resulted in all five judges’ scores being counted, rather than the usual three (with the highest and lowest scores being removed). Whilst the results remained largely the same, had the correct system been used, Jotaro Oba would have risen to third place by circa 0.04 points. The decision was made to keep the original placings for official records, owing to the small scale of the issue and with consideration for other issues that could have been brought about through the use of the system.